The island of Taiwan is located in the Western Pacific, north of the Philippines, and around 180 km from the Chinese mainland. In the 17th century Portuguese seafarers named the island “Formosa“, short for “ilha formosa“, meaning beautiful island. On the eastern coast its silhouette is dominated by mountain chains with some peaks that are more than 3000 meters high. They were created four to five million years ago by the continental drift of the Eurasian Plate and the Philippine Sea Plate, which abut right below the island. 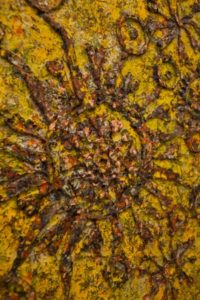 “Mountains in Taiwan are like our mother,”1 says Ying-Tung Tseng. The artist (*1953) grew up in Tainan, Taiwan‘s oldest town, in the plane southwestern part of the island. The massive towering mountain chains, which cover two-thirds of the country‘s total surface area, however, are still visible there. Tainan, today a real metropolis, looks back on a changeful history that is mirrored by the city‘s architecture: next to old Chinese temples and buildings dating back to the era of Japanese rule (1895-1945), the town-scape is characterized by 300 years old fortresses that were once erected by Dutch colonial settlers. As a child Ying-Tung Tseng was fascinated by the impressive fortifications. Passing them on his way home from school, he carefully swiped his hands over the coarse rocks the battlement was made of. Feeling their rough relief structure on the palm of his hand became manifest as a memory that comes alive again in the unique surface structure so typical of his artworks today. Tseng became aware of his artistic gift at an early point. “I realized that my classmates were smarter and had better logical reasoning ability“, says the artist humbly. I’ve been relying on my intuition ever since. I think I’ve honed it well.”2

After he had completed his studies of Visual Arts in Taipei, Tseng went to the USA and earned a master‘s degree in arts at the New York University. Today he lives and works in Tainan, where in 2015 he opened his own museum, the Asir Art Museum.

Tseng’s works reflect the love he feels for his home country, especially for its nature. His latest work Goldener Jadeberg (Golden Jade Mountain, 2019) is a striking example of these close ties. Made of four individual panels, Tseng created a monumental relief painting that depicts Taiwan‘s tallest peak Yushan (also called Jade Mountain). The artist realized the work‘s organic surface structure with the help of papier mâché, a material Tseng employs for nearly all his works. The material properties, initially soft and flexible but very firm and robust after drying, require a very solid carrier or frame, especially with increasing size and weight, other than that it is freely formable.

The majestic brown peaks of Yushan emerge from the image surface like a relief. The foothills are lined by silhouettes of strongly ramified trees that call reminiscence of camphor trees. While a turquoise veil of fog dominates the lower part of the painting, the sunlight is flickering on the sky in warm shades of gold, orange and blue. Further down in the valley its rays shimmer in the treetops as tender sheet gold. The marvelous light atmosphere and the lush usage of gold adds a notion of sublimity, almost something supernatural, to the scene.

Another feature that captures the observer‘s eye is the special surface structure of the mountains, highly jointed in reality, they are embossed here with the mark of a ring or an old Chinese coin. One thing falls into place: This mountain is not just some geographic elevation, it is a very special phenomenon. A mystical mount, which – just as the island did eons ago – has just emerged from the sea‘s turquoise waters (at a second look, don‘t some of the trees look more like corals?) revealing its hidden treasures and resources. 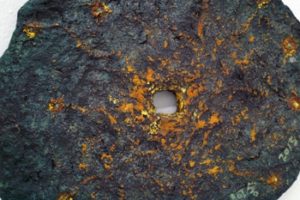 How important it is to keep these energies in balance becomes obvious in the series Five Elements (2015). According to the philosophy of Taoism, there are five different elements: Wood, Fire, Earth, Metal and Water which the artist represents in form of over-sized irregularly shaped Chinese coins called Cash4, with each of the surface designed to reflect the element‘s characteristic properties. Just as all five elements are part of an incessant cycle of transformational processes, the coin or the money in general should be a component of a dynamic energy exchange: the energy you give comes back in form of energy.

Proof of the concept of a perpetual circular change that affects and includes everything can be found in nature and in human existence, too. Tseng visualizes the concept in the series Die 24 Jahreseinteilungen (The 24 Seasons of the Year, 2015-2017). The Chinese Lunisolar calendar5 knows not just four, but 24 seasons, so that the artist created a series of equally many small-sized works. Each bordered by a dark metal frame, every single work presents various small symbols, depending on the season, that are made of metal: a dragonfly or a frog couple, a pack donkey or a teapot – Tseng finds the suitable visual equivalent for every season, its meaning, however, can only be decoded in context of the entire year.

The artist‘s love of nature and his resulting lust for life and his vital force is the central theme and thread that runs through all of Ying-Tung Tseng‘s artworks: Whether depictions of the sun, flowers, corals and trees – no matter how gloomy the colors on the horizon may be at times, even the darkest works carry traces of a promising shimmer or a tender bloom.

And when we take one last look at Ying-Tung Tseng‘s large-size work Träume (Dreams, 2019) where we see the small island of Taiwan peacefully slumbering in the vast light blue waters of the Western Pacific Ocean, with friendly fishes and small heart-shaped symbols orbiting around it – the artist teaches us a fundamental and universal lesson: A caring and responsible attitude towards nature and earth‘s energies is perhaps the most important cultural asset, which – in best case – unites us across all borders.

1 In introduction of: Besuch Taiwan in Berlin 2018

4 Denomination for old Chinese, Japanese, Korean, Vietnamese and Sino-Indonese currency coins made of brass, bronze, copper or in very rare cases of iron, zinc or lead. Usually with a squared, in rare cases round, hole in the middle.

5 The calendar is based on the exact astronomic constellations of moon and sun. The ecliptic is divided into 24 parts of 15° each. This the solar year is structured in 24 substation which explains the 24 season of the Chinese year (“24 Jieqi“ in Chinese).