“Uta Zaumseil is a graphic narrator and a photographic painter. Nothing can be fathomed at first glance. Her stories have open endings, she allows them to take hold of their beholders, and to unfold their magic within them.“1

The hazy light of the winter sun falls through the studio windows. Uta Zaumseil (*1962) is at her work desk, cutting small pieces out of the wooden plate in front of her. A task she performs with great experience and a sure hand. Her eyes focused, the old boards of the timber floor groan under her feet whenever she leans over. The top floor of a former school building offers the right quiet and space she needs to make her art. Moist prints dry on a clothesline behind her, while the printing plates lean against the wall. Wood, linoleum or MDF are the preferred materials that Zaumseil solely uses for her works in relief printing. White-coated MDF is her latest discovery; the preliminary drawing shows much better on them, she says.

The artist lives in Mehla, a small village in Thuringia, just 12 kilometers from her birth town Greiz. “In the end, I‘ve only covered a fairly small area. But that happened by chance, as I‘ve always wanted to leave and go some place far away.“ As Zaumseil sees it, part of this coincidence was the fact that she was living in the GDR up until she was 27. Relocating, especially to Berlin, was difficult in those days, because the GDR administration required formal permits and the art schools accepted only very few students. Before the Wall came down Zaumseil had several professions, she worked, for instance, as bookseller for a couple of years. Her son was born in 1989, which once again strengthen the ties with her home. At the same point she decided to give up her job in order to indulge in art, and it only took a few years before she was granted her first working scholarship, which first took her to Civitella d’Agliano, later to Rome and eventually even to Hong Kong. Her world got bigger.

Zaumseil knew from a very early point on that she wanted to become an artist. As a high-school student Zaumseil visited the Otto-Dix-Haus in Gera as member of a so-called ‘Spezialistenlager‘2 (Expert Camp). A visit that sparked her love of art. When she saw Dix‘s Heiliger Christophorus IV (1939) – a tremendously colorful painting in the style of the Old Masters – one thing was clear to her: that‘s what she wanted to do. But Zaumseil did not pick up the brush, instead she decided to create her art using pencil, gouge and inking roller. In comparison with painting, relief printing offers more room for abstraction, she explains. However, this does not mean that the color effects her works emanate are any less pictorial, as the artist uses up to 45 colors for her prints so that most of them are unique objects in the end. Another aspect that contributes to the prints’ uniqueness is Zaumseil’s elaborate process of creation. For most of her works she employs a method called ‘Lost Cut‘3 for which the surface of the print substrate is gradually taken off while the print is executed over the already existing image from light to dark. This risk-prone technique requires exact planning: Zaumseil has to decide on how many prints will be made before executing the preliminary drawing, as later reprinting from the complete plate is not possible. Sometimes the artist makes use of single motifs that remain on used plates. By placing them in a new context in terms of colors and theme, she either creates new variants of a motif or even entirely new works.

Zaumseil finds inspiration for her motifs in her immediate surroundings. Apart from the vast landscapes characteristic of her home region, abstract architectural structures, her son Oskar and her dog Takeshi, Zaumseil‘s later works increasingly show images of Berlin city life. From the building of the Weissensee Art School over a solid mass of congealed poster layers on a billboard in Prenzlauer Allee to the embracing young couple in a street at night – Zaumseil has a keen eye for the poetic and bizarre aesthetics of everyday occurrences. She moves the things that are seemingly familiar to us from the edges of our perception to the very center, thus awakening us to the peculiarities and the beauty of everyday life. 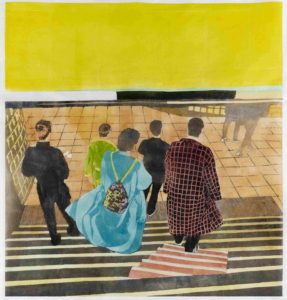 So whenever the artist strolls around the streets of Berlin with a camera in her hand – her kind of sketchbook – she sometimes literally bumps into a motif. Just as it was the case with the work “Baby you can drive my car” (2018). On her way home Zaumseil suddenly spotted a couple of young men in bathrobes looking for a nearby subway station. The artist spontaneously decided to follow the group in order to shoot the picture that would then serve as basis for the linocut which the exhibition is named after. For her work “Abschlußprüfung” (“Final Exam”, 2018) Zaumseil also made a collage of a variety of photos as model for the preliminary drawing. This method allows Zaumseil to abstract her experience and to detach herself from a mere illustration of what she sees. In her works the artist increases the alienation effect that comes along with it by printing over photos or newspaper clippings.

The title Zaumseil chose, a line from the Beatles song “Drive my car”, adds a second level of meaning to the scene: the bathrobe guys in company of two boys dressed in black suddenly turn from a band of normal fellows to the Beatles, who do not use the zebra crossing in Abbey Road in this scene, instead they just leave the car on the curbside and walk down the stairs to catch a subway… And, lo and behold, the observer is right within a surreal narration that Zaumseil opens but deliberately doesn’t finish. It gets even more surreal when the artist uses the same bathrobe wearers in another work where she places them aside an over-sized fish in a submarine world. Altering the image space, Zaumseil explores the full range of meanings of a motif in playful manner. 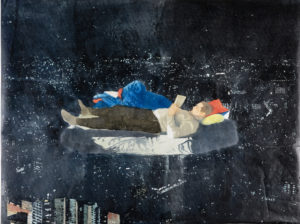 Many her works are characterized by a narrative temporality as her figures are often engaged in some kind of motion or activity, which evokes the impression of a still image. The beholder automatically wonders what will happen next. She pictures the aspect of time particularly well in the work “o. T.” (2018), which shows Zaumseil‘s son entirely absorbed in a book hovering on a mattress above the city of Frankfurt at night. Both the activity of reading as well as the state of hovering require a certain time span. Zaumseil takes the impression of accumulated time to extreme by taking the reader‘s deep absorption literally. Gradually losing touch with reality, she lets him float away. This way the fascination of reading becomes subject to a narrative transfer to the phantasmagorical. Moreover, the artist is convinced that her pictures deliver account of the time it takes to produce the prints. ”I think you see how much time it takes to make these works … , when you take your time to behold the works intensively.“ 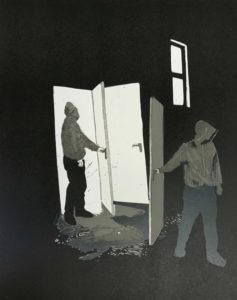 At times the reverie that characterizes many of Zaumseil‘s figures comes along with a certain feeling of forsakenness. In some of her works the artist puts her figures in a wide image space so that they strike as strangely isolated. Men with briefcases or laptops, women with tripods or scullers who turn their backs on the observer or reveal nothing but their shaded profile so that we do not learn much about their mood from just looking at the picture. Instead we are mere links in a broken communication chain and can only guess what mood they may be in with the aid of the color palette. Strong contrasts stand aside subtle, washed-out color fields that Zaumseil does not print with a printing press but with her own physical weight. The artist succeeds in rendering unique light atmospheres characterized by exceptional complexity: the vast dark-blue of a countryside night, a glistening hot summer day or the greenish yellow sunlight reflected by the windows of a house.

The final moment of the printing process, when the last layer is finally applied and the print image becomes fully visible, is a special moment for Zaumseil even after years of productivity: “Suddenly the picture is born“, she says. “Even though I know by now what it will be like, it still is a big surprise to see the result. And that‘s the best thing about it.“

2 In the former GDR the ‘Spezialistenlager‘ was a kind of summer holiday camp for children and teenagers. They were organized in themed work groups like “Art Circle“, “Young Scientists“ or “Young Engineers“.

(C. Heidebluth, translated by A. Liebhold)

Uta Zaumseil has received numerous scholarships and awards, such as for work stays in Civitella d’Angliano, Hong Kong and the Künstlerhaus Ahrenshoop. She was distinguished with the art price of IG Metall and the Ruth-Huhn-Kunstpreis of the Kunsthalle Weimar. Nowadays her works can be found in private and public collections: in the Museum Junge Kunst Frankfurt (Oder), in the collection of the German Bundestag and the Staatliche Graphische Sammlung München.

The artist lives and works in Mehla (Thuringia).